Opening a Levy File with the Sheriff Requirement Changes in 2017 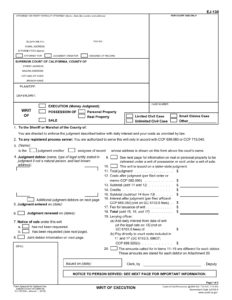 It does not change the law requiring that a registered process server to be the one serving the actual attachment or levy.

This will hopefully relieve process servers from waiting in line for 2 hours in Los Angeles just to open the levy file.  Although inferred, the amendment did not unequivocally address the closing of the file by filing the proofs of service within 5 court days after commencing the levy.

What that will do is free up time of the RPS and allow a messenger or in-house court runner to open the file instead.  I wonder how that might work, given the problems I have fixed at the counter when I have opened levy files, saving a return trip. I also wonder if this might result in more levies being served by non-registered process servers.

The bill also re-worded, and made a stronger statement about recovering costs for the registered process server’s fee for services of the writ.

The bill had no opposition.

The law, as amended, is posted here.

Please sign up for our Process Server Institute Notification Service. You may limit the emails you receive from us by indicating where you are located - or where you want to attend a PSI event to make a tax deductible business and marketing trip out of it! We usually send out about 6 to 10 notifications per year to the areas where we conduct seminars and dinner events. If you sign up for "The Works", you'll receive them all.